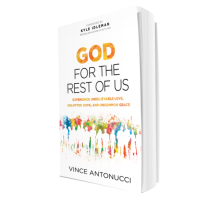 Can you imagine if Karl Barth sat down to write Church Dogmatics and began with an exceptional account of how wrecked his life has been by sin, how disturbed his family is/was, and other unsavory and sordid details of his confusion, pain, and suffering and then told us the story of how God redeemed it, made it whole, and eventually used that life to change the lives of countless other equally shattered and broken people?

Neither can I. But maybe if he had, Church Dogmatics, as much fun as they are to read, would be even more fun. (I confess I have not read through the entire Dogmatics, so maybe he did I and I don't know it.)

To be sure, God for the Rest of Us is not Church Dogmatics. Most will probably be thankful for this. But it is another book among a collection of books that continue to be published by Christian publishing houses who are convinced that the every day readers in the church want to read stories about how terrible the lives of their favorite preachers have been. Preachers used to be paragons of untouchable virtue and holiness. Not so much anymore. It's kind of a newer trend where we get insights into practical Christianity via the growth process of (insert favorite preacher's name here). We get to read about their struggles, their families, their suffering, their pain, their doubt, their heroics, their rise from the squalor of outcast kid who doubts his way through Bible college on to having some sort of an epiphany and their subsequent rise to become super-hero pastors of super-mega-giant churches that are doing everything right that most other churches do wrong.

I hate to be this way, but this is the trend. I don't see it slowing down anytime soon because evidently there is a market for it. Evidently, people are buying this stuff. When I think about my own 'rise to stardom' in the world of churchianity, I usually end up sitting around wondering why it is that some people suffer so much and end up writing books and others of us suffer so much and end up reviewing those books. Sometimes, I suppose we come off as bitter.

This is partly what you get though when you read God for the Rest of Us. I'm not, necessarily, suggesting this is a bad thing. Those who read this book will figure that out on their own. To be sure, I think people should read this book because despite my conviction that the preacher should not be the focus of his sermon or an illustration (I learned this in elementary homiletics classes) in this case what we learn is that Antonucci is not some stuck up snobbish preacher unwilling to get close to people or to have people close to him. I like that this is a man who has been through the mud a time or two and yet somehow or other found Jesus. Or maybe Jesus found him. Or maybe Jesus dogged his footsteps until he turned around and asked where the Master where he was staying or the Master informed him he was coming over for dinner. Maybe its a little bit of all of it. Maybe Jesus follows us long before we ever follow him. I don't know. My point is that while I have grown somewhat weary of reading stories about the preachers who have struggled and suffered so much prior to Jesus (and sometimes after Jesus too) and share it in their books, churches, and t-shirts, church curricula, and DVDs, there is something to be said about what these preachers have learned from these experiences.

I think this book is, partly, the evidence of what Antonucci learned through his experiences.

While some Christians seem to go out of their way to protect God from the unseemly and untidy and unwashed heathens in this world, Antonucci goes out of his way to demonstrate that it is precisely 'these types' of people in whom God is most interested. Jesus did say 'it's the sick who need a doctor, not the well.' OK. So Antonucci has a vision one day, or a calling, and he packs up the family and moves to Vegas where he, following the lead of Jesus, starts to befriend and minister to all the wrong people–you know, people who would never fit in in our comfortable, white-washed, stained glass, middle-class suburban campus style churches. And a church starts to grow–and the Lord 'added to their number daily those who were being saved'–right in the middle of Las Vegas.

And if this story is true, and why shouldn't it be and how can it not be, it is utterly remarkable and unnerving the people that Jesus loves into his church through his people.

I heard a young preacher say something once that was utterly brilliant. He said, we cannot build relationships if we don't start them first. Oh, he had me hooked after that because I know that I am a somewhat strange person when it comes to relationships. Antonucci agrees: "The way to change a life is not by judging people but by embracing them. Not by pointing out their sins but by pointing the way to hope" (19). I mean, how simple can one get? He goes further (and I've read variations of this before, so it's nothing new, but I think it sets the tone for what the book is about): "What's so disturbing is that what Jesus was known for–amazing grace–is the exact opposite of what Christians are known for today. We're known for judgment and condemnation. We're known not for what we're for–loving God and loving people–but for what we're against" (19). It's really hard to argue with this.

When I was still a preacher, here I go breaking my own rule, I was one time ripped a new one in a board meeting because I helped a friend with his taxi service. The reason I was ripped? Well, you see, I picked up drunks from bars, I drove people to a local gambling facility, and every now and again I picked up and drove 'exotic dancers' home. You'd never believe some of the conversations I had with people in that car. But it was too much for the uptight members of the board–after all, I was a preacher and I shouldn't be seen in such places or with such people. (It's a true story. It wasn't too long after that that I left the church.) I think God was teaching me to love people. I should have stayed at the church because I ended up not being very loving towards those board members who seem to want to stifle and criticize me.

Love even the judgmental. God is for church boards.

I don't know what is so difficult about loving people right where they are and then allowing God to do the hard work of changing them. But let's take it a step further and suggest that it is our goal to change people, "If our goal is to change people's behavior, to get them to repent, is fear really the best way to do that?" (156) Spend enough time trolling the blogs and you will see that there are a lot of Christians who believe just that. Spend enough time with Jesus and you will see that it will never work because even those who are won over by fear will not last long. Maybe the voices of those who spend more time with Jesus ought to be the voices heard the most by those who think of God as someone who could never love them. Our lives are shaped and we thrive by love. Fear motivates me to nothing, but love? "God demonstrates his own love for us in this: while we were yet sinners, Christ died for us" (Romans 5:8). What else need be said?

God is for us, and if he is, who can be against us? Yes, this is spoken in particular to Christians, but isn't there also a sense in which we can say that God is for all people? God is patient and not willing any one should perish. God wants all people to come to a knowledge of the truth. All. That is a huge, huge word that is too often left out of our Christianese dictionary. We need to embrace it. We need to embrace all people. And seriously who cares if we embrace people and they take advantage of us or persist in their sin? Will God find fault with us for loving all people?

Ask yourself: Will God judge the church more harshly for loving all people with great love even though they might take advantage of us or for only loving some people who treat us kindly? I think it would be better to ere on the side of love than discernment. God can do the judging, we are called to do the loving.

So, yes, there are parts of the book that made me uncomfortable. For example, I don't know about his list of apologies on 112ff, but I suppose if my apology will lead someone to Jesus, then I'll offer it. What do I care? What matters most: my squeamishness at offering apologies for things I never did? Or someone else seeing the Love of Jesus? I like that he takes the time to open up lengthy passages of Scripture for us and walk through them. In particular, the story Jonah, the story of the woman accused of adultery in John 8, and the story of the Prodigal from Luke 15 were well told. I like that he made reference to The Count of Monte Cristo; I dislike that it was the movie version. I like the stories of redeemed lives and how God took broken people and made them whole again. I like how he is honest about who he is and where he's from because even though I get a little tired of the personal 'how I rose from nothing to start a church and write books' stories, I think in this case it grounds the reader: Antonucci understands well the depths of God's love for all people–not just the few we think ought to be saved. God is for everyone. You name the category, the sub-category, or whatever: God loves people. That's the point. God loves people. So should we.

I am glad for that because this also means he was and is for me. That says a lot.

He ends the book with a worthy challenge for those who read it: Whom Do You Least Want to Love? That's all I'll say because I want you to read the book (so does Antonucci) and I want you to answer the question. I have to answer the question too because I suspect there are a lot of people I find it difficult to love. And yet God loves me. I must change.

Get this book. Read it. Think on it. Then go love someone–maybe someone you never thought you could love.

I am first and foremost a Christian. I am a preacher. I am a husband and a dad. I love reading, writing, woodworking, collecting stamps, playing guitar, listening to music, baseball, golf, NASCAR (24!), blogging, studying, learning, green olives, cashews, Red Delicious apples, Chocolate, and swiss cheese. I am anxious for the Return of Jesus to redeem those of us who are waiting. Thanks for stopping by. View all posts by Jerry H

Verse of the Day

The Sky Just Got Bigger

The View From the Days Before

Other Views From Below

Life Under the Blue Sky